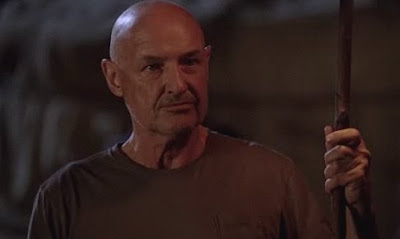 Well, after tonight's Lost season finale, "The Incident", you can pretty much scoop my brain out with a spoon. Like those aliens over at Hulu, the Lost writers have turned my mind to mush. While tonight's episode pretended to answer questions, it really just created more, and left us with a big banging cliffhanger that will gnaw at us until fall.

*SPOILER ALERT* I liked some elements of this episode, but others grated on my nerves. Like the equally infuriating Heroes, Lost writers chose to have characters repeatedly shifting loyalties and motivations every five minutes. And except for the very end, no one seemed all that concerned that their lives would be soon over in a giant nuclear blast.

But let's start with Jacob. The invisible leader of the Others, Jacob has been mentioned, spoken to, and his orders heeded all this time, but no one has ever seen him. Except for Richard, of course. We finally see Jacob in the Lost finale, in the present as well as many past events, where he literally touches the lives of our plane crash survivors. So, this adds credence to the theory that all these people were on that plane for a reason.

But what reason? No sooner do we learn who Jacob is than he ends up skewered on the end of Ben's knife. We know that Jacob is ageless like Richard, and that he's responsible for Richard being ageless. We now know he doesn't live in the scary cabin in the jungle, but in the remains of the statue on the island's shore.

It appears Jacob's been around awhile, and long enough to acquire a nemesis. A nemesis who has taken a long journey just to kill Jacob--a long journey that shockingly includes becoming John Locke. Not the John Locke we've known, but some sort of evil doppelganger. This is now starting to sound a bit like The Mummy. I'm waiting for Richard to appear with the Book of the Dead under his arm.

Ilana, traveling with the group that originally tried to get Miles to go to the island with them, brings Richard the body of John Locke to show him the truth of who he just let in to see Jacob. Ilana finally gets the answer she wants to hear about what stands in the shadow of the statue, but Richard answers in a different language, so I have no idea what that answer is.

I have three questions about Jacob: 1) Why did he provoke Ben when he knew Ben was there to kill him? 2) Why did he warn his nemesis about the coming danger with his last breaths? 3) After living all this time, was it really that easy to kill Jacob? 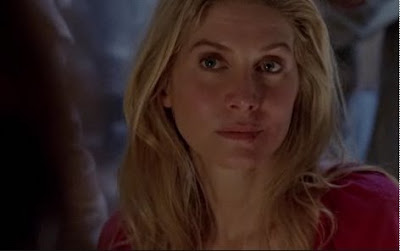 Flip over to the other side of things and we get Jack, determined to follow Daniel's instructions and blow the island to bits. Juliet is all raw emotion and rash decisions because of her fear of losing Sawyer to Kate. I don't deny that Kate and Sawyer still have chemistry, but to me they don't seem ready to just dump all over Juliet. Kate even makes an extra effort to not be a jerk to Juliet, which maybe makes Juliet more suspicious.

Either way, the whole back and forth with Jack, Kate, Juliet and Sawyer was not my favorite part of the episode. Only Sawyer seemed to be acting in a rational manner--selfish, maybe, but at least you could follow his logic. And he truly does love Juliet...it was agony watching him lose her into the magnetized tunnel.

So here we are at the end of the Lost finale. Everyone's condition in 1977 is irrelevant because Juliet detonated the bomb. They will all either be dead, or will reappear in a different time loop. The question is, will they remember the experience or will they be strangers to one another? Will fate guide them all once more to the island, even if the plane doesn't crash? Will what happens in the past affect the future timeline we've been watching with Sun, Ben, Locke II, and Richard?

Extra moments that I liked in the episode: Rose and Bernard enjoying their retirement in the woods. I loved that Rose sounded like a Lost skeptic, completely disinterested in the crazy antics of the other survivors and their continuing missions to shoot stuff and try to save the world. I think this is where Juliet lost her mind a little, seeing how happy Bernard and Rose were and wishing she and Sawyer could have had that kind of contentment.

I also liked Miles dryly pointing out that detonating the bomb might be the actual "incident" they were trying to avoid. Miles spent enough time with Daniel to know how risky playing with time could be.

When Sun saw Aaron's cradle at the beach camp, the first thing I thought was, "Good, is someone finally going to find Charlie's ring?" I'd always thought that was a bad place to leave it, and there it is at last.

The Lost creators apparently decided with the season finale they would give fans enough material to fight and lose our minds over for the approaching summer months. I think they've succeeded. Anyone got a spoon?