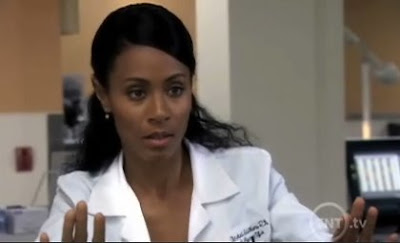 TNT aired the pilot episode of the Jada Pinkett Smith nursing drama HawthoRNe tonight. Like Showtime's Edie Falco nursing drama Nurse Jackie, HawthoRNe centers around a strong, female character who fights every day for the lives and rights of patients while struggling with issues in her personal life.

HawthoRNe, however, is a more conventional drama than Nurse Jackie, and I don't happen to think that's a bad thing. Smith stars as Christina Hawthorne, the Chief Nursing Officer of Richmond Trinity Hospital in Virginia who has to juggle the stresses of the job, the bureaucratic hospital machine, the doctor/nurse antagonism, and the struggles of being a single parent. When we join the story, Hawthorne is trying to get through the one year anniversary of the death of her husband. Her day begins by trying to talk a cancer patient out of committing suicide--and the cancer patient happens to be a friend of her late husband's.

This doesn't turn out the way you think it might, and sets up a day of trials for Hawthorne and her staff. The cast is filled with good actors from other TV series, and it's fun to try to place names with faces. Michael Vartan (Alias) stars as one of the more compassionate doctors on staff, and the lovely Suleka Mathew (Men in Trees) joins the cast as a sweet nurse with some self esteem issues due to her prosthetic leg.

There's also Christina Moore (90210, Hot Properties) as a nurse with an odd sense of duty to veteran soldiers, and Canadian actor David Julian Hirsh (Lovebites, Naked Josh) plays a male nurse with the hots for her. Jillian Armenante plays a much more serious and much less annoying character than her frenetic role on Judging Amy, and Joanna Cassidy (Boston Legal, Six Feet Under, and of course, Blade Runner) swoops in to play Hawthorne's icy mother-in-law.

The pilot episode of HawthoRNe is packed with character introductions, hospital emergencies, trouble with Hawthorne's teenage daughter, and the near death of a patient that has both doctors and nurses pointing fingers at each other to take the blame. It's not quite as fast-paced as ER, but has that same format of overlapping storylines and altering focus between ensemble members.

HawthoRNe has some flaws; for instance the doctor/nurse rivalry may be played a little too heavily. I'm also not a fan of bratty teenage daughters interfering in my dramas, but considering Hawthorne's work schedule and the family's grieving over her husband's death, it's understandable that the daughter would be acting out. The relationship just didn't seem all that real to me, but maybe it will improve as time goes on.

Highlights of the pilot episode were the tense scenes involving an unstable homeless woman named Isabel (Aisha Hinds), who shows Hawthorne her apparent latest find--a baby. There was also some sweet humor, too, with a young nurse Kelly (Vanessa Lengies) who soldiers on through a day of being confused, overwhelmed, left behind, yelled at, and vomited on, desperately asking Hawthorne: "Am I going to cry every day?"

I'm willing to give HawthoRNe another look. It may not be groundbreaking or trendily quirky, but it seems like it could be a nice bit of summer entertainment. It also could develop into a quality drama that gathers a faithful audience; with this cast, it definitely is possible to do great things with the characters.