The End of Torchwood 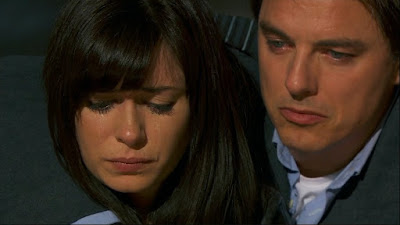 I'm still stunned over Day Five of Torchwood: Children of Earth. And I know a lot of fans are angry over the way things have turned out. I'm not sure how I'll feel in a few days or even a few weeks, but right now I feel somewhat betrayed.

It's not that Torchwood: Children of Earth was bad TV. It was compelling, and suspenseful, and heartbreaking. But after all we've been through, to get the ending we got, just seems extraordinarily cruel. And part of a sort of character assasination they've been doing with Captain Jack from the start.

I've written about it in great detail in my Torchwood review over at AC, because this blog format doesn't so easily accomodate such long-winded rants. But I hope you'll indulge me and take a peek at the article, and let me know what you think.

Is it the end of Torchwood? The show will most likely go into a fourth season, with perhaps another mini-series, but how much can we hope for at this point? Obviously we'll have to change our expectations completely. Because the Jack we began this journey with is not the Jack we've ended with.

See all of my Torchwood posts.