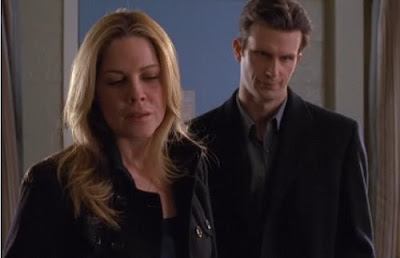 I love Mary Shannon, the tough and abrasive US Marshall of USA series In Plain Sight. Mary McCormack is one of the few actresses on TV that actually makes for a believable police woman. She's got stature, attitude, toughness, and a shrewd squint that lets you know she's got a BS meter working at all times. Sure, she's pretty and sexy, but you don't get the impression that she's doing her nails for three hours before going to work.

Despite the fact that I love Mary Shannon, with all her biting sarcasm, she's been going a bit too far lately. She's just been too abrasive, hitting people where it hurts over and over again, whether they deserve it or not. She's negative and pessimistic and can't be bothered with anyone's issues unless it's witness-related.

*SPOILER ALERT* Tonight's In Plain Sight episode, "Training Video", finally acknowledged what we've all been feeling. After beating up on Raphael (Cristián de la Fuente) for wanting to move in, for wanting to fix the walls in their home, for not having a job and then for taking a job Mary doesn't approve of, Raphael had enough and asked her to knock it off already.

Rafe stood his ground, and I loved that he told her he wasn't her mother or sister, that she couldn't treat him like he was 5 years old and order him around. After Mary finally agreed to marry him in the last episode, I thought she might relent a little, but she's still obviously chafing against commitment and compromise.

Later in this In Plain Sight episode, when she rains all over her sister's parade because her boyfriend bought her a car, Peter (Joshua Malina) steps in. Skilled at counseling people with addiction problems, Peter gives it to Mary straight, taking her to task for bullying everyone and insisting on being in control all the time. He even questions whether she's so pissed about Brandi getting a new car and Raphael a new job because she didn't do it. He also lets her know that all she's done for her family makes her a hero, but it's not right that she then acts like she doesn't even like any of them--including Rafe.

These are hard truths, and I was honestly happy to finally hear someone say them. Mary even seemed open to the possibility that he might be right. Whether this will make Mary a little easier to live with remains to be seen.

Watch In Plain Sight on USA, Sunday nights at 10/9c.