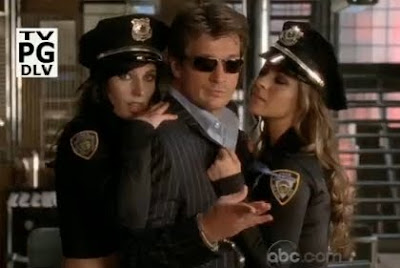 The good news is, Castle does seem to be a little tighter and more riveting than the episodes I caught last season. The murder mystery was a lot more suspenseful, and wasn't just a barely-thought-out backdrop for Castle and Beckett's banter. As per usual, Fillion is a joy to watch. He makes inappropriate jokes at crime scenes that Law & Order's Lennie Briscoe (Jerry Orbach) would be proud of, and turns on his cocky and reckless charm as he tries to bluff his way through a game of poker with tattooed mobsters.

Once again Castle gives us great rapport between Castle and his mom and lovely daughter. I find myself in the same place I was last year--Katic just doesn't cut it for me. Sure, some of the writing is cheesy, but a more skilled actress could make it work better. But when I'm constantly aware of Katic's ever-changing hair styles and inner-lid eyeliner, I'm thinking something must be lacking in the performance.

Katic is fine in quieter moments, and small doses. I wish Castle would change tack, and make the show all about Castle himself. We could see him on his travels as he tries to do research for his books, flirting with women, schmoozing unsavory types, and getting himself into trouble. He could occasionally cross paths with Beckett, who would bail him out of jams--or he could assist on random cases.

This would greatly improve Castle, I think, by focusing on its strengths--Fillion and the gals that make up Castle's family. It would also avoid all of the awkward wrangling they keep doing with the plot to make it feasible that a mystery author would be continually working on police cases.

I'll keep watching for Fillion, but I suspect Castle won't take on the "must-see" spot in my schedule. If something more intriguing comes along in that timeslot, I'll probably be watching that and will catch Castle in reruns--or maybe online. Right now it's an enjoyable piece of fluff, and if they keep the investigative aspect interesting and cut back on the cheesecake a little (and Katic's distracting eyeliner), I'll be happy to tune in every Monday.