Say Yes to the Dress -- "Overbooked" and "Practically Family" 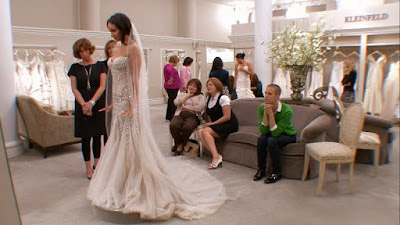 Say Yes to the Dress -- "Overbooked"

Apparently beauty queen Bre had tried on over 3,000 dresses before coming to Kleinfeld's store, and I don't think they were exaggerating on that number. A former beauty queen, Bre wanted to abondon the more glitzy styles of the stage in favor of a more traditional gown. Problem was, she didn't like any of the traditional gowns. Bre was finally able to Say Yes to the Dress when her consultant found her a $17,000 sale dress that Kleinfeld sold to her for $5900. It was more of a silvery color, with intricate beading and plenty of glamour. Once Bre's friends convinced her that she looked like a beautiful bride and not just a beauty pageant contestant, she let herself love the dress and acknowledge that traditional just wasn't her style after all.

The second half of Say Yes to the Dress "Overbooked" involved Jennifer, a happy mild-mannered bride who unfortunately brought along her crazy-eyed and domineering twin sister and an entourage of naysayers who were more interested in playing dress-up themselves than in assisting the bride. Though Jennifer found dresses she loved, her entourage crushed her enthusiasm and she left without a dress. She promised to return to Kleinfeld for another appointment, and I'm hoping she'll bring someone supportive next time.

Say Yes to the Dress "Overbooked" also returned to one of the brides that hurt my heart on a previous episode. After he daughter scoffed at her desire to wear an elegantly sexy dress, Susan settled on an antique lace dress that had a matronly feel to it. Returning to her fitting, Susan was unhappy with elements of the gown that Kleinfeld did fix for her. She had a happy wedding day, which is what matters the most, but I think a second look confirmed for Say Yes to the Dress viewers that she would have been so much more excited and confident in the dress she had wanted originally.

This episode of Say Yes to the Dress focused on two girls whose mothers disapproved of their wedding gown style choices. Tiffany won the battle and went home with the dress of her dreams, while the other bride caved to her mother's wishes. She returned a week later to try on the gown she wanted again, which she looked gorgeous in, but she talked herself out of it again to confirm to herself that her mother had been right.

I wish I had a photo to share of Tiffany's pink floral print dress. It was a gorgeous alternative choice, and fit in perfectly with her hot pink and leopard print wedding. In an effort to try and accomodate her mother's more traditional sensability, Tiffany tried out a white dress--then added a leopard print band at the waist, and suggested pink tulle under the hem. Kleinfeld fashion director Randy wisely suggested she go with the pink dress and make a grand statement, rather than doing something hodge podge with a white gown. Tiffany's mother relented, with the mother-in-law-to-be's help, letting Tiffany be happy with her unique pink dress.

I enjoyed the fact that both of tonight's Say Yes to the Dress episodes had non-traditional gowns. It's fun to see the different options that exist for girls who don't want to wear white satin--especially since the style and elegance of the gowns still stand out as distinctively bridal, even though they're not in the classic color and/or shape.

Watch Say Yes to the Dress on TLC, Friday nights at 9/8c.