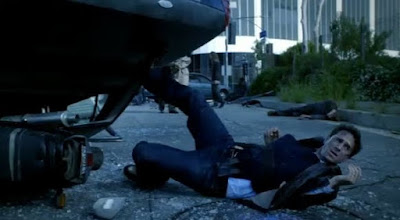 Okay, I admit it. I'm already hooked on FlashForward. This mystery/action/drama is startling, intriguing, and chock full of great actors. I didn't watch many previews for FlashForward, so although I knew the basic premise--that all the world passes out for 2 minutes, 17 seconds and while they're out they have visions of the future--but it never occurred to me the consequences of people all falling asleep at the same time.

When our hero Mark Benford (Joseph Fiennes) falls asleep, he's in the middle of a high speed chase with his partner Demetri Noh (John Cho) at his side. When Benford wakes up, he's upside down in his car on the freeway. Climbing out of the broken glass, Benford gets up to see utter devastation. Imagine the LA freeways, choked with traffic doing 60 miles and hour, and suddenly everyone blacks out.

The implications are terrifying. Plane pilots knocked out as planes are taking off or landing. People falling asleep in the bathtub. Patients dying in the middle of surgery with the doctors passed out on the floor next to them. 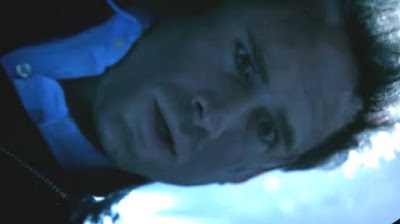 As the smoke clears, Benford and the FBI office try to make sense of what's happened all over the world. They try to piece together facts, and then they start discussing their visions. They discover that some of them overlap, with matching facts, and that they all took place 6 months in the future on the same date and time.

This is where both the mystery and the drama begins. Benford sees himself returning to his former alcoholism, and his doctor wife Olivia (Lost's Sonya Walger) sees herself with another man. Benford's partner Noh sees nothing at all, which he comes to realize may very well mean he's dead in the future.

Tonight our cast of characters find themselves on paths leading to the futures they saw. Benford, who saw flashes of a bulletin board with all their work on the FlashForward case, finds the leads he saw in his vision panning out. Olivia meets the man in her vision at the hospital, Lloyd (Jack Davenport), the father of one of her young patients. And it turns out that Mark and Olivia's daughter recognizes the son from her vision.

After being convinced by fellow agent Janis Hawk to add his non-vision to the FBI's "Mosaic" website, where everyone in the world is trying to match up their visions to make sense of them, Noh gets a phone call from a mysterious woman. She tells him she saw his post on the Mosaic board, and that she has unsettling news--in her vision she saw an agency document that said Noh had been murdered a month previously.

To keep us on a further unsettling vibe, Benford finally gets his daughter to open up about her scary vision. And she mentions the name of the dangerous man he and Noh had almost apprehended the day before--a man who appears to have been awake during the FlashForward.

I always consider it a good sign for a series when it grabs me right away. It's rare for a series to hit the ground running, but when you've got Joseph Fiennes, Sonya Walger, John Cho, Courtney B. Vance (Law & Order: CI, ER), Lynn Whitfield (The Women, Without a Trace), Brían F. O’Byrne (The International, Brotherhood), and luscious Jack Davenport (Pirates of the Caribbean, Coupling), it makes it easier.

While there are a few awkward or duh moments here and there, I'm willing to overlook them for now because of all the great suspense and drama. I really had been skeptical that Shakesperean actor Fiennes could play tough FBI agent, but that classical training apparently means you can do anything. He's physically strong, emotionally conflicted, clever, capable, and sexy. The perfect flawed hero for the FlashForward story.

Watch FlashForward on ABC, Thursday nights at 8/7c.
Posted by Valerie David at 11:25 AM