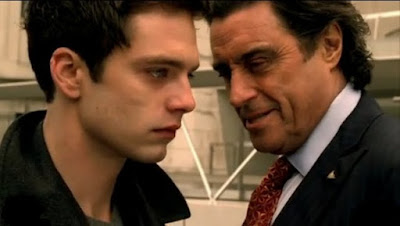 King Silas (Ian McShane) lashes out at his son, Prince Jack (Sebastian Stan) in Kings.
Thanks to Clarissa over at TVOvermind for giving us the heads-up that the too-soon canceled drama Kings is out on DVD. It may seem crazy to put a half-season of a canceled drama into a formal DVD release, but Kings is that good. I heartily recommend it for the story (a retelling of David and Goliath), the eloquent dialogue, the beautiful cinematography, and for just pure entertainment value. It's a mix of drama, spirituality and mysticism, action, romance, and morality tale woven into a rich tapestry of juicy scenery-chewing goodness.

The performances of the ensemble cast are stellar. Ian McShane as the King and Susanna Thompson as his wife Queen Rose put in fantastic performances, playing up the melodrama to the hilt--but to me, Sebastian Stan was a revelation. With each episode, he added another layer to his ambitious, damaged, repressed, vengeful, vulnerable and lustful Prince Jack. I'm glad Stan still has work on the delightful Gossip Girl, though it's still a pale shadow of the delicious role he had on Kings.

Christopher Egan as David was so ethereally pretty it was hard to believe he was real at first, but he developed his character more and more with each episode. Marlyne Afflack hovered at the King's right hand as Thomasina, and wowed us with the emotional depth she gave her gutsy character. I truly lament the "what-could-have-beens" of this excellent series.

Check out my reviews and recaps of Kings, and get Clarissa's take on the Kings DVD at TVOvermind.