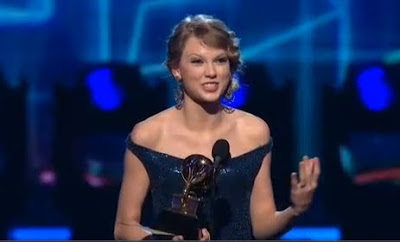 Last night's 52nd Annual Grammy Awards has to be one of the better awards ceremonies we've seen of late. Though it felt a bit odd to have so few actual awards presented, it was nice to have such a performance-driven show, where acts like Lady Gaga (with Elton John), Pink, and Beyonce pulled out all the stops.

After all the jabs at Adam Lambert's sexy AMA performance, it will be interesting to see if anyone mentions Pink's near nudity, Lady Gaga's revealing costume, or Beyonce's crotch-grabbing with the same disdain. I'm guessing not. Certainly Lambert's performance was overtly sexual in places, but it also occurred after little kids' bedtimes, unlike tonight's ladies.

Despite my jabs at the girls, however, they did put on some spectacular Grammy Awards performances. Pink's high wire act was apparently a repeat from the VMAs, but I hadn't seen it, so it was jaw-droppingly amazing to me.

Taylor Swift nabbed some top honors, including "Album of the Year". I don't really get what the fuss is about this still-very-green performer, but apparently a lot of industry people see potential in her as much as her fans adore her. So hopefully she'll develop into an extraordinarily talented powerhouse.

Looking for more Grammy goodness? Read up on the Grammy Awards winners, or check out my full recap and review for extensive details of the televised Grammy Awards.