Michael Emerson, aka Ben Linus from Lost, Visits The Soup 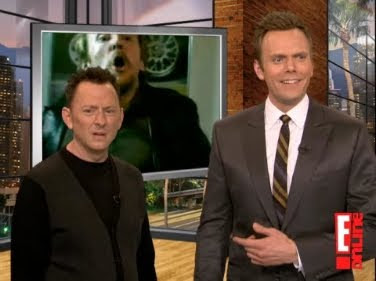 Okay, The Soup is consistently insane and funny, but tonight's introduction of Michael Emerson to the show was just plain genius. While surprise guests are pretty common on The Soup, usually it's a one gag bit where the star feels awkward and goes away quickly. Not Emerson. Not only is this man king of creepy drama, but he knows how to play satire. Watch for yourself:

If you haven't seen the show or clip, highlights include Michael Emerson finding the plot of 24 "confusing". When told by Joel that some TV characters get stabbed and then they come back to life, Michael scoffs and says "Ridiculous." Michael also asks if Joel is in some alternate reality that exists at the same time as the shows he's showing. (He's really not off base that a show that shows clips of shows is confusing...heh.)

I loved that when Joel introduced "Reality Show Clip Time," Michael said, "Define reality," in a spooky Lost sort of way. And I do agree with Michael Emerson that watching clips of the Kardashians makes me want to go move to an island somewhere.

So, all in all, just brilliant. This episode of The Soup is further proof that Michael Emerson is made of win. He's one of the best Soup guest stars I've ever seen, and I think the show runners agreed, because that's the longest time any guest I've seen has been on the show. Good on them for recognizing comedic talent when they see it.


PHOTO: Michael Emerson, who plays villian Ben Linus on Lost, visits Joel McHale on the set of E! clip show The Soup, c2010 E!Online.
Posted by Valerie David at 12:14 AM