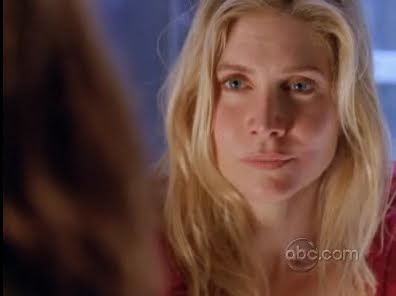 Juliet is still awesome on Lost.

(SPOILER ALERT) I knew after six years of build-up that we were never going to feel satisfied with the end of Lost, but I didn't think I'd feel as let down as this. Well, actually, since Richard turned out to be not magical at all, and the mystery of the Island turned out to be a shiny light in a cave, I'd started to get an inkling.

During the ridiculously long two hour intro to the finale (which was 30 minutes of interviews and flashbacks to the series, and 90 minutes of freakin' commercials), writers Damon Lindelof and Carlton Cuse gave us their true vision of Lost. That vision was that Lost was about the characters, and their personal journeys. That's the most you can get out of these final episodes--just one last visit with all of the characters we loved so much.

The one thing I have to give to season 6 of Lost was it made me love Jack again. His character had so many ups and downs and personality shifts and constant anger that it had been painful to see our hero fall apart. To see him rise again in everyone's estimation, to earn Sawyer's respect and rekindle Kate's love--that was wonderful.

Once again Matthew Fox (Jack) and Terry O'Quinn (Locke) played opposite each other so well. I loved when Jack told the Man in Black that he had disrespected Locke by taking his form, and I also love that in the end, Jack became a man of faith.

Not unexpectedly, arguably the best part of "The End" finale was at the hands of Ben Linus, that deliciously complex and tortured soul we've come to know, despise, pity, and love over six seasons. While the reunions of all the couples on Lost was very moving, the moment Hurley asked Ben to be his number 2 got me more choked up than anything. The look on Ben's face--the final reward of being asked to take care of the Island, by someone who truly needed him--it was what Ben had been searching for all along.

I thought the plane was going to explode mid-air when the few Losties that were left tried to escape, but thankfully that didn't happen. Unfortunately we didn't get to see any of the happiness of that life. We only got to see all of our favorite people do the equivalent of LOTR's Undying Lands and sail off into the light. Hence, the WTF? part of my post. The end result of all the mysteries? The Losties had a miserable existence, suffered and got killed off on a supernatural island that had some sort of worldly significance, hung around in a happyland purgatory till most of them arrived, and then they took the next step.

So, basically, after loving all of these characters and living with them through all the heartache and love and humor and pain, the final note we get is: hey, they all died happily ever after.

Personally, I thought those doors were going to open and they were all going to walk out onto the Island. Maybe Jacob would be waiting to welcome them, and there'd be all the people from the hundreds/thousands of years that candidates had been brought to the Island and killed. At least that would have perhaps had some symmetry to it.

These are my initial thoughts. Now it's time to watch Jimmy Kimmel and see what the actors have to say. Maybe they have more profound ideas than I do at the moment. What did you think of the finale?

ETA: I also wanted to say that I loved the Juliet and Sawyer reunion. The scene when Juliet dies has to be one of the most heartbreaking moments Lost put us through--right up there with Charlie's death. To see them get to be together again, and to hear Juliet ask Sawyer for coffee--as she did before she died, when she glimpsed the Other Side--was hearbreaking all over again.

The creators of Lost have said they didn't want to give us all the answers, so that Lost fans would continue to debate the series and it would live on (and we'd all buy more Lost-related stuff, I imagine). What they actually did is they didn't really answer anything, so fans can beat every last metaphor, image, and line to death with a thousand more theories ad infinitum. Depending on your personality, I suppose you will find this either exciting and brilliant, or lame and irritating. Or perhaps a combination of the two. After all, Lost was all about ambiguity.