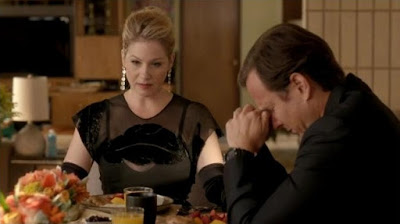 Christina Applegate and Will Arnett look as depressed
as we feel watching Up All Night.

Thanks to Up All Night, Will Arnett now has the distinction of starring in two sitcoms I turned off before they were over (the other was Running Wilde). At least this time I made it halfway through episode "New Car," but it was a painful 12 minutes. It's sad when you take Saturday Night Live writer and Parks & Recreation producer Emily Spivey and put her together with Maya Rudolph, Christina Applegate, and Will Arnett and you get this painfully awkward mess.

The beginning of the episode focused on Chris (Arnett) trying to bring the sexy back to his relationship with Reagan (Applegate). He's frustrated that she goes from attractive power-suited woman to a new mom in white sweats who thinks it's hilarious when she drops a spaghetti meatball in her lap. It's amazing I was able to contain the laughter.

There were a few funny moments, mostly supplied by guest star Will Forte, who appears as a relaxed, hippie-esque dude who offers Chris some advice on a sexy Dad makeover--and generally steps over personal boundaries. 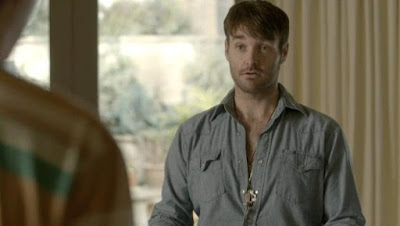 Sadly, fellow SNL alum Maya Rudolph doesn't fare so well. Starring in Up All Night as a talk show host and unstable crazy woman, in "New Car" she finds out a destructive ex-boyfriend is getting married. Rudolph was one of my favorite performers on the late night sketch comedy show, but no one really seems to know how to cultivate her talents outside that realm. Once they got into the bad 80s flashback of her music video with her boy band boyfriend, my hand went for the remote.

Like many a Saturday Night Live episode, some of the set-ups seem like they should be funny, but they just aren't. The actors look uncomfortable, like they're trying to force the humor, and the whole thing becomes way too painful to watch.

There seemed to be a lot of hype and expectation for this show, which was the reason I tuned in to watch. I was sadly disappointed, and it looks like other viewers are as well. HitFix reports that the show's ratings have been sliding downward, and if they keep slipping, Up All Night could get relocated or removed altogether.

With the talented cast, maybe the show has the potential to get better. I just couldn't wait.

Up All Night currently airs on NBC, Wednesday nights at 8/7c.