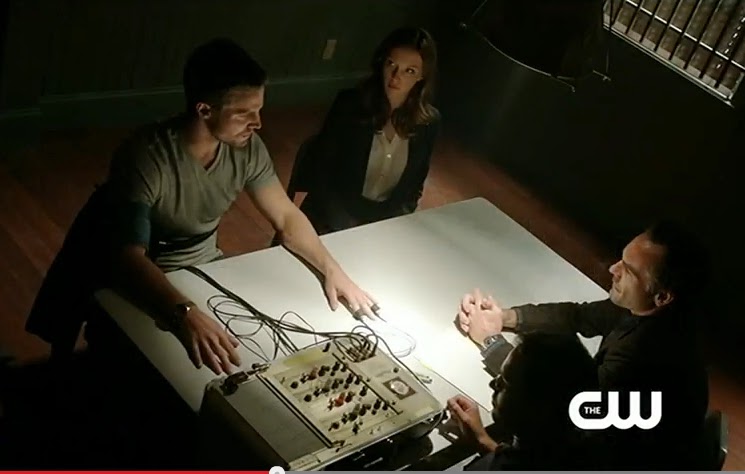 Last week "Arrow" made a startling move: Our hooded hero was caught on camera as Oliver. It's tough to continue your career as an avenging vigilante if your secret identity has been blown and you've been arrested for murder. This week's episode, "Damaged," had a surprising way of working itself out of that corner.

"Arrow" sent us back to the island in flashbacks again, this time to show us Oliver getting captured by the mysterious soldiers on the island. In their commander's tent, he's shown an old photo of his hooded Asian friend in military garb and asked for information. Oliver refuses to give up anything, even when he's brutally tortured by a scary dude in tactical garb and a two-color mask that comic book fans will know as Deathstroke, a.k.a. Slade, enemy of the Teen Titans.

Oliver's friend shows up to rescue him, and we get a hardcore throwdown between the island warrior and Deathstroke. The original Arrow wins the fight long enough to get his protege out of danger and into a cave. He lets Oliver know he's impressed that he survived the nasty torture without betraying him moments before he traps the young Mr. Queen inside the cave with a large boulder and draws the pursuing soldiers away.

Free as a bird...or an Arrow

Back in the present day, everyone in Oliver's life is worried about his impending incarceration -- except for him. As he tells his new partner in justice, Diggle, getting caught was part of his plan. He knew suspicion would fall on him eventually, and so he wanted to do it on his terms. He has Laurel, patron saint of lost causes and a glutton for punishment, represent him in court. She gets him home confinement with an ankle bracelet, and he throws a party.

What seems an obnoxious lack of decorum by his family and friends is all part of setting up an alibi for Oliver. He sends Digg on a mission to break up an arms deal -- as Arrow. Once the police get reports that the man in green has struck again, while their suspect is partying in front of a hundred witnesses, the prosecution has no choice but to drop all charges. Oliver's joy is almost short-lived, however, when an assassin bursts into his room and tries to kill him. Luckily the broken monitoring bracelet sends Detective Lance to the scene, and he shoots the assassin at a very opportune moment. 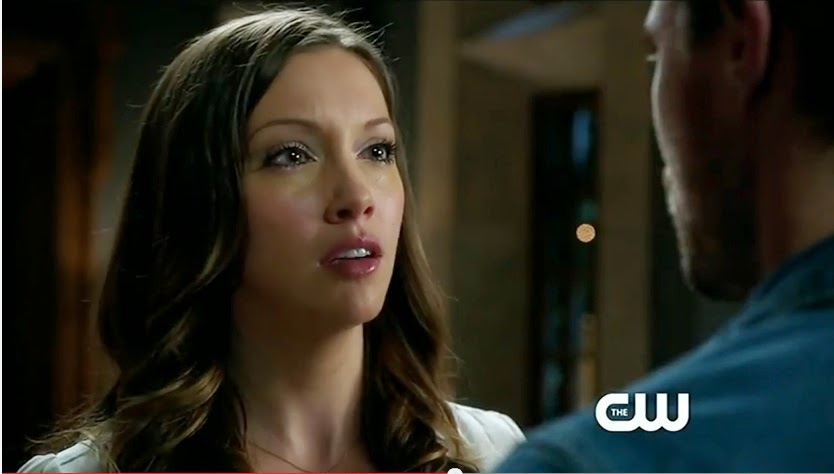 In the process of defending him, Laurel finds out about Oliver's nasty scars and realizes that she wasn't the only one going through hell after that fateful boat accident. After inspecting those scars personally, she also finds out that she's still attracted to her ex, but after one smoldering kiss, they both agree that getting together's not going to happen. After all, Oliver also just found out that Laurel's mom left after her sister's death, so that's one more reason for her and Detective Lance to hate him.

Oliver doesn't blame them and encourages Laurel to think that he's just damaged goods, incapable of being some Robin Hood assassin. He's playing a part, trying to keep his identity safe, but we get the feeling he's probably more emotionally scarred than he realizes.

Meanwhile, Walter tries to figure out more about his wife's secrets and sends his most trusted security expert down to the warehouse to move the boat wreckage to a secure location. When he gets the news that his guy got into a car "accident," he calls Moira in for a pow-wow. She tells him he's in over his head and he has to stop messing with powerful people. He's totally stunned that she's been lying to him for so long and packs his bags for a business trip to Australia with an indeterminate return date.

Moira goes and confronts her mysterious rendezvous partner about the recent death and attempted assassination of her son. When she gets a "sorry, it's just business" reply, she threatens to turn off her "good soldier" persona and go postal on them if they ever harm any of her family. We're guessing this will just inspire them to make her the first target.

Arrow lives to fight another day

Oliver's clear to be Arrow again for now, but Laurel, Thea, and Detective Lance still have varying amounts of suspicion about his identity. What do you think, "Arrow" fans? Which one of them will find out the truth first?