I Think I Am a 'Smash' Convert 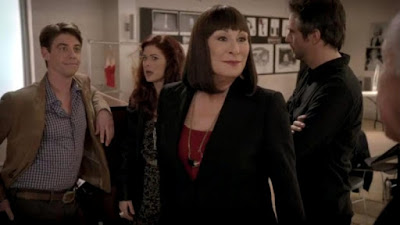 As you may recall, I was a bit perplexed by all the critics showering "Smash" with praise when it first premiered. Since the writers were looking at multiple episodes of the new series, I gave them the benefit of the doubt that the show would improve. It has. Oddly, it still maintains some of the same flaws it had at its inception, but it's reeled me in with its soap-y, sing-y charms.

Anjelica Huston and Jack Davenport are still the highlights of the series, particularly since both characters have been given more material to work with as the show progresses. Davenport's sleazy director character Derek is less of a well-worn caricature now. I really like that despite the whole casting-couch storyline and badass womanizer vibe, we get to see how Derek absolutely cares about the work. He's creative, passionate, and works hard on his vision while dealing with a whole lot of temperamental artistic types.

I said on Twitter last night that Huston elevates every scene she's in. Your eye just goes right to her, with that trademark severe bob and red-lipped Mona Lisa smile. She's got gravitas, but with a wicked little glnt in her eye. I like that we got to meet Eileen's granola-Greenpeace daughter, who chastised her mom for getting a bit too ruthless in her quest for Broadway success. I also treasure that she's got a hunky bartender boyfriend with a shady past who is both exciting and also a surprising source of capital for Eileen's Marilyn venture. 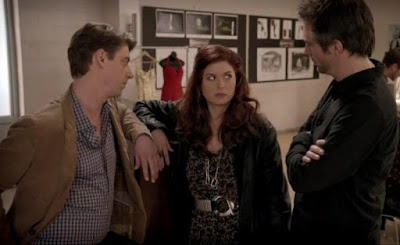 I still want to enjoy the writing duo of Julia (Debra Messing) and Tom (Christian Borle), but I'm not sure how I feel about their romantic subplots. Maybe it's a theme they're working with, but "Smash" is awfully heavy on love triangle/cheater storylines. Nearly every character seems to be involved in one, which gets a bit ridiculous after awhile.

After the debacle of the adoption storyline, "Smash" writers took an even more insane route by having Julia engage in an affair with a former lover. This seems completely implausible. It also sets up even more scenes where her teenage son acts like a punk and disrespects her at every turn. Oh joy.

The only way this sort of character development will work for me is if she realizes it was all a sham and moves on as a divorced woman. Otherwise, "Smash" is trying to convince me that a woman who cheated on her husband twice with the same guy--in what sounds like a long-term affair on the first go-around--is still this happy housewife who wants to stall her career in order to adopt a baby? Not gonna believe it. If she's a flawed woman who was trying to talk herself into the idea of being in a "perfect marriage," then I could understand some of the stuff that hasn't felt right since the pilot.

Aside from the overabundance of love messes, "Smash" is captivating with its insider look at trying to get a musical off the ground. I knew that productions don't just appear out of thin air, but to see the extent of work, reworking, tryouts, workshops, meetings, planning, blocking, more tryouts, more workshops, more political machinations--it's all so fascinating. This is the really good stuff on "Smash," the meat of the show.

"Smash" has also done a great job of dragging out the competition between Ivy (Megan Hilty) and Karen (Katharine McPhee). There's so much drama as the girls edge each other out at various times, for different roles/favoritism/tryouts, and then both get thrown over on "Bombshell" for a "star." It definitely shows how mentally tough you've got to be to make a living in the creative arts.

Empathy for the aspiring leading ladies, as well as all the players trying to get their own dreams realized, is a great draw for the show. It give you something to believe in, to hope for. We want to see the day when that Marilyn musical is finally realized, and we have no idea who's going to be in it or what exactly it's going to look like when all is said and done. That's good drama.

All I ask is that you send Julia's son off to college. Please.

Check out: Why Are Critics Raving Over Weak 'Smash' Pilot?