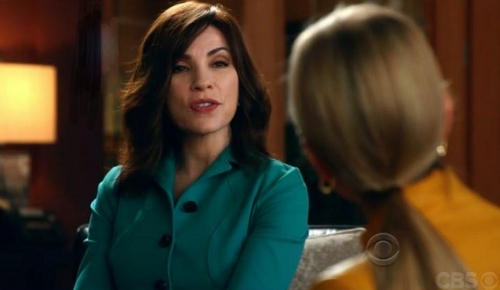 "The Good Wife" kicks back into high gear this Sunday, and we'll be jumping in to the results of four different cliffhangers from Season 3. Don't remember all the nuts and bolts of the spring finale? You can head over to Yahoo! TV and read my recap, where you'll also get a peek into how Season 4 will be handling some of the big issues.

So what other SPOILERS do we have for Season 4? Well, for one thing, Kristin Chenoweth will not only appear in the Season 4 premiere, but will have a continuing arc on the series. It had previously been thought that her storyline as a journalist might be cut short due to an on-set injury, but thankfully she's reportedly back to filming scenes on "The Good Wife."

For more good news on "The Good Wife," the talented Maura Tierney will guest star on the show as a wealthy businesswoman who could become the Big Money behind Peter's campaign for governor. Tierney lost a lead role in "Parenthood" due to a battle with cancer, but she continued on with "Rescue Me" and it'll be great to see her here. One of the things I love most about "The Good Wife" is all the opportunities for good characters it provides for actresses we admire.

One of the spoilers I'm less happy about is that apparently Alicia will have to defend her son in court after "a run-in with a state trooper." I'm hoping that Zach is not at fault in this instance, because I've never been a fan of his punky, rebellious teenager regressions.

In other casting news, John Shea ("Gossip Girl") will be coming on the show as Cary's dad, a guy who kicked his son out of the house at 18 so he could learn to fend for himself. It will be interesting to see how impressed he is with what Cary has been up to--we're guessing it's not going to be a perfect relationship.

Don't forget to check out "The Good Wife": Where we left off, and what's in store for Season 4 before you watch the Season 4 premire on Sunday, September 30 at 9/8c.

Posted by Valerie David at 11:50 AM No comments: Links to this post 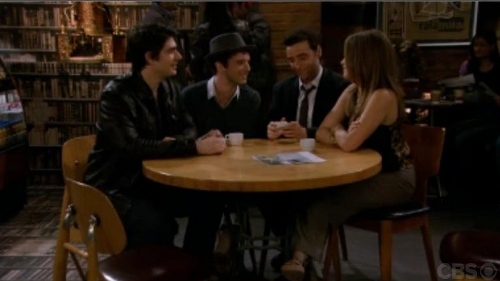 When I saw who the three male leads for "Partners" were, my first thought was, "Oh, please don't suck!" After all, I've loved David Krumholtz all the way from short-lived "Chicago Sons" to "Serenity" to "Numb3rs". Brandon Routh was a perfect, gorgeous "Superman" and brought some uber sexy bad boy goodness to "Chuck". Last but not least, we have the fabulously funny Michael Urie of "Ugly Betty" fame, where he had fantastic catty chemistry with firecracker Becki Newton.

Having never watched the epically long-running series "One Tree Hill", I'm not familiar with Sophia Bush, so you all will have to let me know how her TV history rates. She didn't bowl me over in the "Partners" premiere, but she did fine, and a pilot isn't usually the best judge of acting. Like with most series, this first episode had a bit of that "trying too hard" vibe, something Matthew Perry over at "Go On" is still fighting with a few episodes in--and I know he's a good actor.

"Partners" focuses on the lifelong friendship between Joe (Krumholtz) and Louis (Urie). Their bond is so strong that it threatens to interfere with Joe's relationship with his fiancee Ali (Bush) in particular, and to some extent Louis' relationship with his boyfriend Wyatt (Routh). At one point, Ali complains that Joe called Louis immediately after she and Joe had sex for the first time. Louis adorably explains the shared excitement: "You were so out of our league!"

There's plenty of cliche gay/straight humor here, but everyone is so good-natured and likable that the playful banter is entertaining, even if it isn't ground-breaking. When Wyatt confesses, for example, that he feigned understanding one of Joe's manly metaphors because he was afraid he'd seem "too gay" otherwise, Louis pertly replied, "You're a male nurse and you DVR every program on Bravo. That ship has sailed."

Routh's character was most surprising, perhaps simply because my most recent impression of him was of his worldy, ruthless, scheming character on "Chuck". Here he's sweet, soft-spoken and sort of airhead-y, with perfect knowledge of his good looks but not so swift with the innuendoes. He's something of a "lite" version of Joey from "Friends", and I'm not convinced he or the writers quite have a handle on his character yet.

The "Partners" pilot had plot turns you could see coming from a mile away, but I don't think plot twists are going to be the point on this show. A lot of critics have been referring to the show as an old school sitcom, and it doesn't seem like a bad thing to return to simpler times. After all, "Partners" was pleasant, with appealing characters, and I laughed throughout the episode. No complaints here.

There's a possibility this fluffier fare could wear out its welcome, but for now, I consider it worth tuning in for the next episode. It'll be a nice way to spend a half hour.

Posted by Valerie David at 4:47 AM No comments: Links to this post