'Star-Crossed', "These Violent Delights Have Violent Ends": 13 Things We Learned


I thought a lot happened in the pilot episode of "Star-Crossed," but it turns out that was just the appetizer to the complicated whirlwind stirred up in Episode 2, "These Violent Delights Have Violent Ends." Here are 12 things we learned, including a few big reveals (more cool blue glowing!) and lots of choosing sides.


1. "Star-Crossed" has made things even more complicated for Emery and Roman. In case you didn't catch it last week, Emery's dad accidentally shot and killed Roman's dad in an altercation in The Sector. As you might guess, this has increased tensions between the humans and aliens. Mr. Whitehill takes a leave of absence and Galadriel from "Supernatural" takes his place on the force. Well, technically his name is Officer Beaumont. 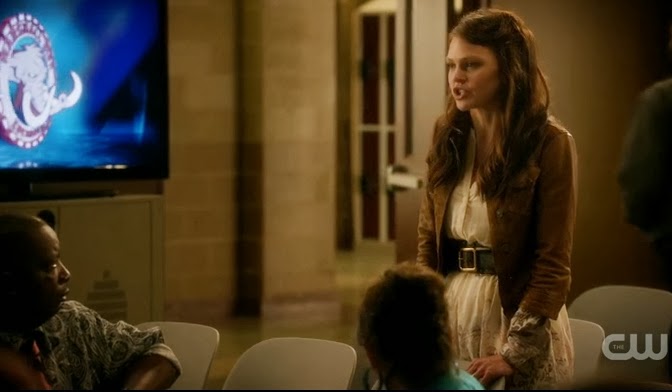 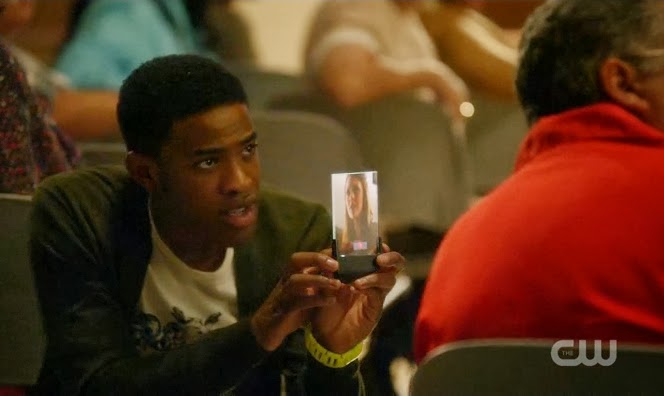 2. At a school board meeting to discuss the all-important Homecoming (is Caroline from "TVD" on the planning committee?), we learn there's a crazy, conspiracy-theory-loving-alien-hating group called the Redhawks. When the board votes down allowing the Atrians to come to the dance, Emery makes an impassioned plea for unity. Which her good friend Lukas of course films. The video goes viral and Emery is insta-famous for her bad-ass standing up the The Man. Or something.


3. Roman has a creepy uncle Castor who shows up to take over the burial ceremony (which Roman says is his own duty.) When Castor takes our hero to meet with the Atrian's Four Elders, it appears he wants to take over tribal leadership as a "temporary" measure until Roman is old enough to take his father's place. Roman, suspicious, protests, saying he can do the leading himself. 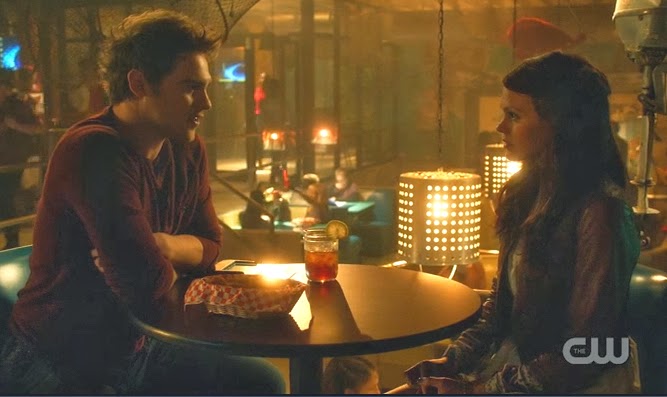 4. Meanwhile, Emery and Grayson bond over fried pickles, and no, that's not a euphemism. He confesses to understanding Roman's loss, as his own brother was a National Guardsman killed on Arrival Day.


5. We find out that Gloria Valdez has bosses in DC, giving her all the power she needs to veto the board's decision to leave the Atrians out of Homecoming. Party on, aliens!! 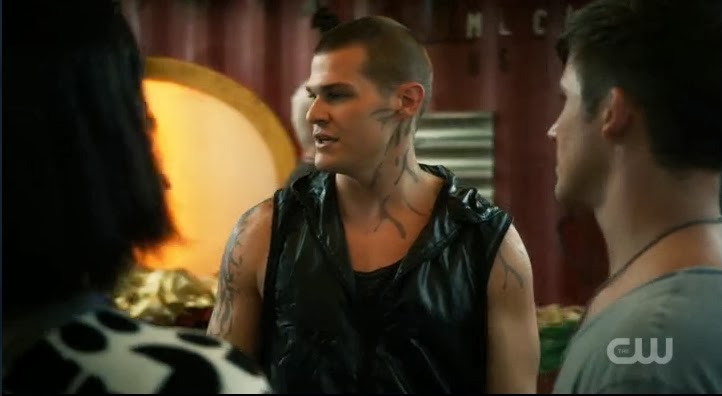 6. Drake, the hunky Alien with the big biceps, claims there are free Atrians running around in the swamplands of Louisiana, presumably hunkering down with Hayley's wolf clan from "The Originals." One of the Redhawks crazies seems to think there are also Atrians who had some laser-tattoo removal and are embedded amongst the humans, waiting to strike.


7. Roman learns that the Trags, a rebel faction of Atrians, are stockpiling weapons for a big attack. He plans to infiltrate them and stop them, but then finds out that they're also targeting Emery's family as vengeance for Roman's dad's death. Roman decides this is too much to handle alone, so he goes back to his creepy uncle and asks for help, hoping Castor can use his former ties to the Trags to stop war from breaking out. 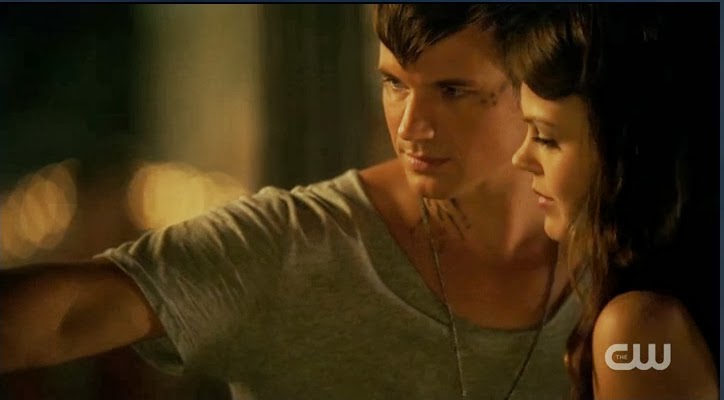 8. We learn that Emery is an eternal optimist, thinking she and Roman can still have a friendship/romance/thing. Ever the noble hero, Roman loves that she has his dad's endless optimism, but fears being close to her could do her more harm than good. 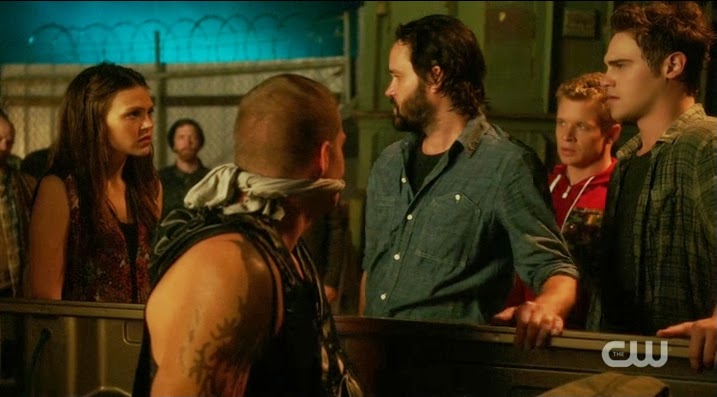 9. Turns out Eric the Terrible's dad once owned a popular, successful restaurant. Then the powers-that-be built the detention area for the Atrians in the same neighborhood, driving business down and eventually leading Eric's father to ruin and alcoholism. So it's no surprise Eric jumps in on a Redhawk plot to kidnap Drake, though he's surprised when he finds out his rebel buddies wanted to do more than "scare" the alien. Luckily Emery and a knife-wielding Grayson are there to rescue Drake, who is too tough to say thank you.


10. Homecoming is a dangerous place. Roman tackles a hooded figure just as he's aiming a laser-rifle at Emery's head. The man is revealed to be...Galadriel! Erm, Beaumont! The officer flashes some blue light at Roman, and we realize those crazy Redhawks were right, there are Atrians posing as humans out there. Roman uses his father's good name to talk his way out of getting himself killed, but this ain't over. 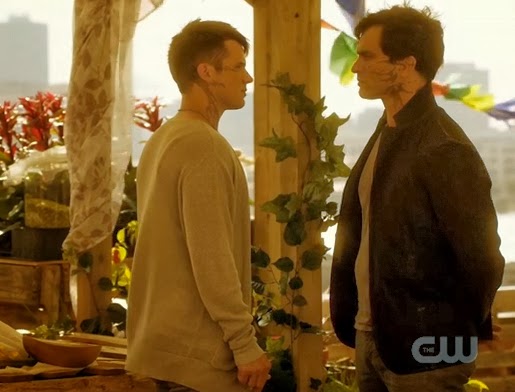 11. Roman realizes being a teenage tribe leader may be more work than he can handle, and he gives the responsibility over to his uncle after all. Nothing blew up yet, so he's assuming his uncle is on his side, but claims he'll take away the leadership if Castor gives him any reason to doubt him. Castor sneers and twirls his mustache...well, on the inside. It's not long before we see him meeting with Beaumont, telling him to keep a spying eye on Roman and Emery. 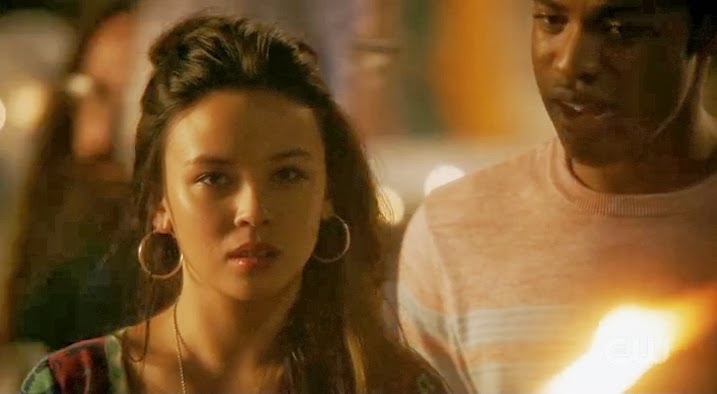 12. Julia's arm starts to glow when she touches Roman's arm, which we're guessing happens metaphorically to any girl that touches such a good-looking guy. But she realizes that Roman may be that blue angel she thought she hallucinated, who cured her of cancer. Hopefully she can keep a secret, because this is definitely one the Atrians don't want to get out. 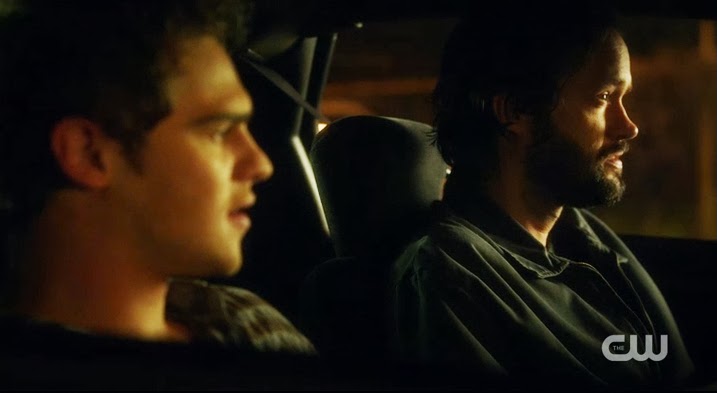 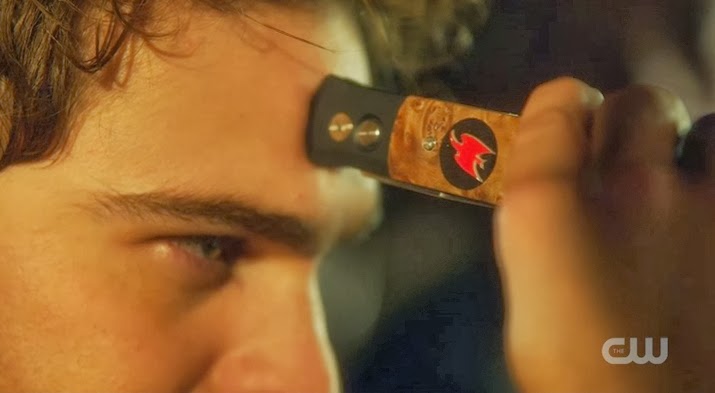 13. For just one more surprise at the end of the episode, we find out Grayson is in league with the Redhawks after all, and supposedly only intervened in Drake's kidnapping because he felt it was too risky a move with all the guards around. But we suspect he might have a few true feelings for Emery as well.

Got all of that?


PHOTOS: Screencaps of "Star-Crossed" -- "These Violent Delights Have Violent Ends", 2014 The CW, fair use.
Posted by Valerie David at 9:28 AM