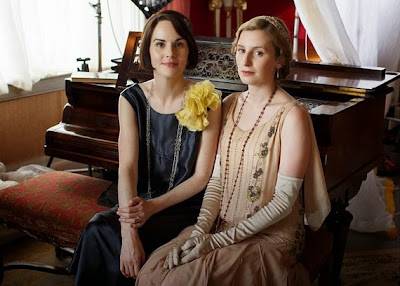 With the American run of "Downton Abbey" now over, we've got some time to reflect on our favorite characters before we're graced with Season 6. With the introduction of a new suitor (Matthew Goode, ZOMG YES PLEASE), I couldn't help wondering about where exactly Mary (Michelle Dockery) is headed, and if we'll still like her when she gets there.

When the series premiered, Mary was one, tough, snobby customer. When she got over herself and bonded with Matthew, and eventually happily married him, we were treated to a kinder, fairer, gentler Mary. She evolved as a person. She was still intelligent, and witty, and entertainingly haughty. In fact, she got to use her intellect to take a larger role in her own destiny, and that was a hugely satisfying turn in the narrative.

This season, however, feels like a slide backward into the Mary of Olde. I appreciated her modern stance of getting to know Tony Gillingham (Tom Cullen) in the biblical sense before marrying, and I was glad she realized he was not quite the partner she needed in life. But then she toyed with him unnecessarily afterward, which seemed unfair considering the worst thing he'd done was love and want to marry her. Sure, he was a bit domineering, but so are a lot of guys in that time period.

When you've got the scathing Charles Blake (Julian Ovenden) telling you essentially to stop playing with your food, you know you've got a serious problem. It's starting to feel like she'll never be able to take any man seriously. Which is maybe what all this torture is about.


The reason Mary rejected Tony in the first place was because she was still not ready to move on after Matthew. Though she says she is now, I'm not entirely convinced. It's going to take a lot to live up to her late husband's memory, and that's got to leave her feeling frustrated and lonely.

Those feelings of loneliness led Mary to one of her harshest comments this season, when she said she wasn't so concerned that Tom (Allen Leech) and Rose (Lily James) were leaving her alone--but that they were leaving her alone with Edith (Laura Carmichael). This was, of course, said right in front of her sister.

This is the worst regression that Mary's slid into. Her nastier encounters with Edith were many years ago, and it seems like they both should have moved past it by now. There certainly doesn't seem to be any reason for the verbal abuse Mary has laid onto her sister all season.

You would think Mary would be a bit sympathetic when Edith's fiance died, but apparently since she herself didn't care about him, no one should. And all the subtle digs about "I'm the mother here" to Edith have been particularly damaging. Season 6 MUST include Mary finally finding out Edith's secret--and hopefully, not being a horrible, horrible person about it.


While the joy of Mary's character has always been her sharp tongue and wry commentary on everyone and everything, it has its limits. While her treatment of her dopey male suitors may be forgivable, her harping on Edith really needs to soften up in future. There was a glimmer of hope in the nursery during the finale, when Tom and the sisters joined hands and fondly remembered Sybil together. Surely they can find SOME sort of common ground as the two remaining siblings in the family.

What do you think, "Downton Abbey" fans? Has Mary regressed too far into meanness or is that just the way you like her?

Posted by Valerie David at 5:49 PM No comments: Links to this post